HOT TOPIC: All Eyes on the U.S. Economy as It Caps Off Decade of Growth

All Eyes on the U.S. Economy as It Caps Off Decade of Growth

The current economic expansion passed the 10-year mark in June 2019, becoming the longest growth streak in U.S. history. Despite its record-breaking durability, U.S. gross domestic product (GDP) growth was slower than expected over the past decade, averaging just 2.3% annually since the expansion began in June 2009. By comparison, GDP grew at a vigorous 3.7% annual rate during the 1990s expansion that lasted slightly less than 10 years.1 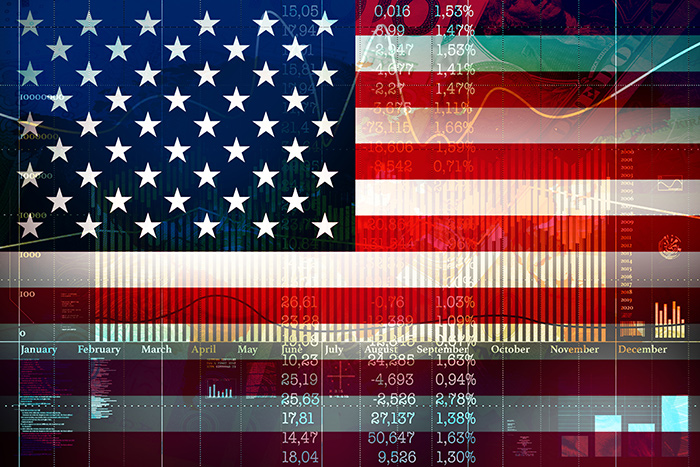 Here’s why some economists are still on the fence about the growth prospects for the U.S. economy in the coming months.

There are signs that the United States could be nearing the end of the expansion phase of the current business cycle, while other indicators suggest that U.S. households are still in a fairly strong position to continue powering growth.2

Full employment. Since early 2018, there have been more job openings than workers to fill them, so theoretically there is now a job for everyone who wants one. Even so, workers’ wages are taking longer than normal to recover.3 The unemployment rate held steady at a 50-year low of 3.6% in May 2019, although hiring by U.S. employers also took a notable drop.4

Bond market warning. The yield on three-month Treasuries was higher than the yield on 10-year Treasuries for several weeks in May and June, which can be a sign of looming economic trouble. An inversion in the curve, which occurs when short-term yields are higher than longer-term yields, is typically (but not always) followed by a recession in the next two years.5

Room for optimism. The last two recessions were brought on by the bursting of major asset bubbles, specifically Internet company stocks (March 2001) and housing (December 2007). Currently, there are no obvious examples of heavily overvalued assets. Inflation has remained low, and overall household debt seems to be at sustainable levels.6

In a survey conducted by the National Association for Business Economics, 56% of its members cited the escalating trade conflict as the biggest downside risk to economic growth in 2019.7 If trade talks between the United States and China fail to ease tensions, tariffs could cut more deeply into the profits of U.S. companies and/or push up costs for consumers.

Second-quarter 2019 earnings of U.S. corporations are projected to show a decline of 2.6%, following a 0.4% decline in the first quarter. If that projection comes to light, it would mark the largest year-over-year slide in earnings since the second quarter of 2016.8 Already, modestly rising wages and higher material costs (partially due to tariffs imposed on traded goods) have started to cut into profit margins.9

The Federal Open Market Committee (FOMC) has raised the federal funds rate nine times since 2015 (to a range between 2.25% and 2.5%). It’s normal for the Federal Reserve to tighten financial conditions and remove support for the economy as it strengthens, but this is a tricky task. There are now some concerns that interest rates may have risen higher than the economy can tolerate, hindering growth.

However, the Fed’s June statement noted increased uncertainty and said the committee intends to “closely monitor the implications of incoming information for the economic outlook and will act as appropriate to sustain the expansion.” This language was widely interpreted as laying the groundwork for a rate cut in the near future. Projections show that seven out of 17 FOMC members expect the central bank to cut rates by half a percentage point by the end of 2019.11

One Federal Reserve official (St. Louis Fed President James Bullard) dissented and recommended cutting rates immediately. Bullard has argued recently that a rate cut might provide some “insurance” in case a slowdown is sharper than anticipated.12

On the other hand, a rushed rate cut that turns out to be unnecessary could leave the Fed with less room to aid the economy if it encounters a serious slowdown or an unexpected shock down the road.

The National Bureau of Economic Research (NBER) is the organization entrusted with dating the turning points in U.S. business cycles. Though a recession is often defined as two consecutive quarters of declining GDP, the NBER relies on a broader set of markers. It defines a recession as “a significant decline in economic activity spread across the economy, lasting more than a few months, normally visible in real GDP, real income, employment, industrial production, and wholesale-retail sales.”

Many recessions occur unexpectedly when the economy is operating at peak levels. And even with the benefit of hindsight, it took a full year for the NBER to gather all of the necessary data and declare the official beginning of the last recession.

The hard truth is that whenever the economy takes its next downward turn, you probably won’t see it coming, and you may not even know about it until months after it happens. For this reason, it might be wise to have a financial strategy that takes ever-changing economic conditions into account.