January is named after the Roman god Janus, who was portrayed as having two faces: one looking backward, the other looking forward. In a similar manner, economists like to look in both directions to better understand economic trends. But instead of two faces, they use economic measures called “indicators.”

Some economists consider unusual trends. For example, former Federal Reserve Chairman Alan Greenspan thought that sales of men’s underwear could be an indicator, because when times are tough, underwear is among the first purchases that men postpone. It’s also been suggested that an increase in coupon redemptions could be a sign of an economic downturn, while higher champagne consumption can signal good times.1-2

These may be fun to consider, but serious economic indicators focus on hard data. The most commonly studied indicators are tracked and published by The Conference Board, an independent research organization. Composite indexes of each type of indicator are designed to more clearly summarize and reveal economic patterns and turning points by smoothing out the volatility of individual components.3 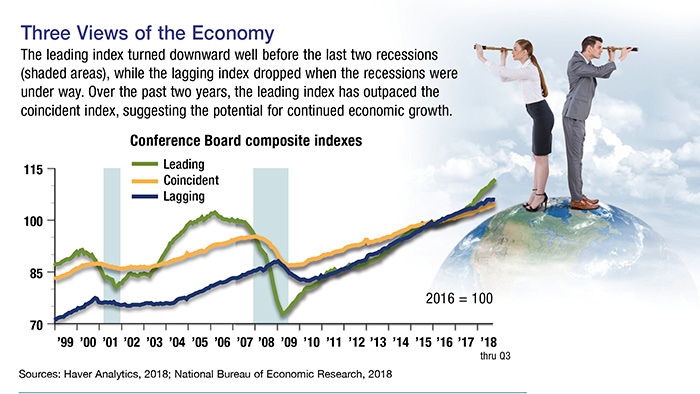 Leading indicators garner the most attention because they may forecast the future direction of the economy. The Conference Board Leading Economic Index® includes 10 components:4

Coincident indicators generally move in step with the broader economy and may offer confirmation that the economy is moving in a particular direction. The Conference Board Coincident Economic Index® tracks four indicators:5

These factors help to define the current state of the economy.

Lagging indicators can help confirm that an economic trend has occurred in the past or is already in progress. The Conference Board Lagging Economic Index® includes seven components:6

These measures tend to move more slowly than the broader economy. For example, the recession officially ended in 2009, but wage growth (i.e., labor costs) has only recently begun to pick up speed.7

Although economic trends are important, it might not be wise to place too much emphasis on these indicators when making investment decisions. A sound investment strategy should be based on your time frame, goals, and risk tolerance.

All investing involves risk, including the possible loss of principal.